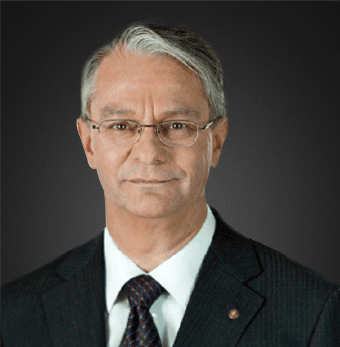 Ken Lypkie was born Kenneth Douglas George Lypkie in Edson, Alberta on November 21, 1953. He was raised on an acreage in the sticks west of Edson. As is often said the land was only good for growing stumps but it was home. Many of the country schools were closing at the time so the children were bused to Edson to attend elementary, junior and high school. In 1971 Ken moved to Edmonton to attend the University of Alberta, completing a B.Sc. in Chemistry in 1976, a B.Ed. A.D. in Education in 1977 and an L.L.B. in law in 1982. He enjoyed a short stint teaching school from 1977 to 1979 in Duffield and Stony Plain, Alberta. In 1977 he married Janice Henderson, a very becoming red head who tolerates him to this day.

A Career of Success

Ken completed his articles in law in 1983, working under the
direction of Justice Douglas R. Matheson and Judge Donald G.
Ingram, both of whom, at that time practiced with the Matheson & Company law firm. He remained at Matheson & Company until 1992 when he branched out on his own. For the next nine years he was affiliated with Campbell & Company. Then in December of 2001, Ken and Janice Henderson formed the law firm of Lypkie Henderson. The practice is restricted to wills, estate administration, estate planning, corporate law and real estate. More recently we have added the area of employment law.

The Lypkie family consists of Tyler and Fraser, whose bios can be found on this website; Jessica, a graduate of the University of Alberta in Business and the Cordon Bleu Culinary School and who is currently attending Kent Law School in the U.K.

Ken was very involved in Rotary. It began in 1988 when he was
introduced to the Rotary Club of Edmonton South by Judge Don Ingram. From 1992 to 1994 he served as Club Secretary, from 1994-1995 he served as Club President and in 2001-2002 Ken was back on the board as Club Director. The years 2009- 2010 saw him serving once again as Club President. Even though Ken is no longer involved in Rotary it remains as some of the best years of his career. Rotary is an excellent opportunity to meet excellent people, which, but for Rotary one would not have met. The motto “service above self” continues to guide Ken in his endeavors in the practice of law as well as with friends and family.

Though now retired from the practise of law Ken is kept busy as assistant gardener to his wife Janice, managing his ever growing bee apiary and caring for their Edmonton and Canmore properties. A steady stream of Grandchildren (currently 3) provide a never ending source of satisfaction and chuckles, in person and over the web. Without question that which Ken misses the most about the practise of law is the interaction with the most wonderful client base a practitioner could ever hope to accumulate. But, there comes a point in time when one must step aside to allow the next generation to take over the reins. And a most capable generation they are.

We know that many areas of law can be overwhelming. Whether it’s your estate, job, or business, mountains of legal documents should be the least of your worries. Let us take care of the details so you can move forward confidently into the future.
Book Your Appointment

At Lypkie Henderson, you can trust your case is in the right hands. Contact us today to start off on the right foot.

We want to hear from you